“Nevada City is just such a beautiful sweet town and a very idyllic place,”  says Alela Diane reflecting on the town at the confluence of the foothills and mountains in the Sierra Nevada where she grew up.

The musician and multi-instrumentalist, who has lived in Portland, Oregon since 2006, creates a woodsy ethereal folk sound that fluently joins inspirations of her landscapes and geographies both personal and physical, and it’s clear to pick up on how the forested winding roads and surreal daydreamy Yuba River of those Sierra mountains can be heard throughout her earlier recordings. While the quaint town lies mostly off the map, sitting along a single lane highway and having a population significantly less these days than at its peak during the gold mining era in the 1800s – and even then, still only a couple thousand people – the town seems to breed creativity, with arts centers, an annual film festival, and a an ecology perfect for fostering the creation of music.

With lyrics sung in an almost haunting delivery, the substance of Diane’s songs include dreams, concurrent and overlapping layers of time, and the ecology of loss, however she speaks of her music with an easy laughter.

“I’m a happy person, I have a very sweet life. I have it pretty good, I have two young daughters, and I’m grateful for it,” she describes. “But music is the place that I’m putting things that are more challenging. My music can come across as somber or dark, but that’s the place that I put all of that so I don’t have to carry it around with me.”

Those who have ever spent time in Nevada City would be hard to miss the charm that the town exudes. However the charming blocks that hold theaters with live productions and shops selling homemade ice cream also support a darker streak beneath the tea lamp lined streets. Which is all to say that with the charm comes underlying forces, a sense of hidden tides beneath the surface waterflow.

“I grew up on two and a half acres outside of Nevada city. I was up on a hillside, dappled in sunlight, and it was really a special place. My parents split up when I was 20 and it was really devastating. They sold the house that I grew up in, and that was the catalyst for starting to write songs.”

Her earliest songs were a mix of nostalgia and whimsy. And if there was one thread that continued through those early songs and might continue into some of my music today, that thread might be a shifting and fragile sense of stability. While earlier that may have been with where she was at, later it took on other shapes…

“Right after high school, I moved to San Francisco, so at the time I was living in sf in 2002, 2003 and reflecting back on the loss that I felt, losing my childhood home, losing my family, here I was in the big city with all of my possessions in cardboard boxes, and that shift and that change was the thing that I needed an outlet for, and that became music. So my very first recordings were largely inspired by that kind of sadness that descended.”

In 2004, Alela released her first collection of songs entitled The Pirate’s Gospel. Recorded by her father, the music was given out and sold on burned CDs. The title track was written following a camping trip on an island in a mountain lake.

“There used to be this campout we would have with our community out on the lake and to get to the camp site you would have to take a boat. So we would row across this lake to get to our campsite, and the Pirate’s Gospel came out of that wildness of being young and having a crazy campout with all your friends.” 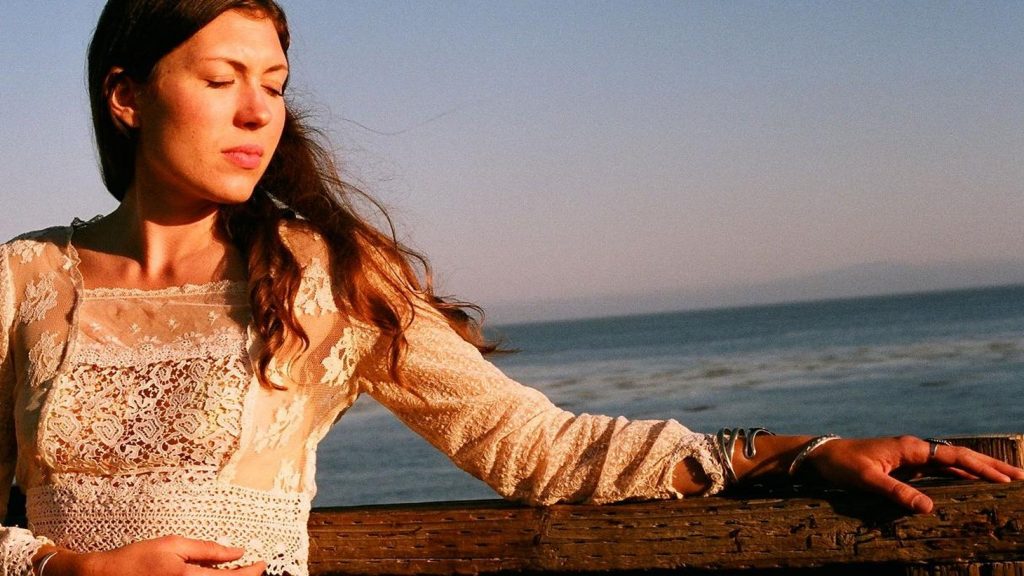 Alela has gone on to record 4 full length solo albums, along with additional full length collaborations with Alina Hardin, Ryan Francesconi and her band Wild Divine (which also included her father). While most of her recent music contains collaborations with other musicians, she explains that most of her writing is still an isolated process, only bringing in others afterwards to fill out the songs she has composed.

“Writing music is mostly a solitary experience. I’ll give you an example of how my process works, on this album I’m recording now, for the past several years I’ve chipped away when I have time, writing music. I have a little backyard music studio, and I’ll stumble around. I’ll work on a song or I’ll rework a song or I’ll revisit it later. When I do collaborate with other musicians, I’ll generally have a finished song, and then the collaboration happens with what they’re adding to it later. So my friend Heather Broderick, who I’ve toured with a lot, is a big part of this record. She’s doing arrangements on top of the song, the filigrees, flute parts and string parts and backing vocals that go on top of the song.”

Change and instability has largely shaped her more recent work, however this may have less to do with tumultuous personal events, and more with her learning to play piano and writing her music in this way rather than on the guitar which characterized her earlier work.

Listening to Diane’s recorded work over the years, it becomes apparent how well the musicians whom she chooses to work with compliment her sound. Over time, some long term friends and musicians have joined her on tour, adding their own music to Alela’s generally stripped down folk sound. It was from these longer term collaborations that the idea of a live album arose. This album would be 2021’s Live At The Map Room, recorded in Portland, Oregon.

“Heather Woods Broderick and my other friend and bandmate Mirabai Peart toured together in 2018 to promote my album Cusp. That was my band, the three of us toured as a trio, and we learned a lot of my older material, and songs off Cusp. We toured several parts of Europe and we did the West Coast, and at the end of that year when we got back I was like ‘let’s just go in the studio and record our show’, we could play it so seamlessly because we’ve been playing it so much.

“So we just popped into this little studio in Portland and just played our live show. This happened at the end of 2018. It’s not technically a live show because there’s no audience there, but it’s a live performance where we were all just in the room playing the songs together as if we were doing a concert. We recorded 16 songs in a day, I think we did two takes of each song just to make sure we could choose the one which was better. Nothing was overdubbed. That was our show.”

These days, Alela has two daughters. Asked if they’re musical, she responds, “We’re still trying to figure that out… On my new record I’m having them sing a little bit, and when they sing along it’s very sweet.”

And while the combination of her daughters’ young ages and the pandemic bringing travel plans and interactions to a halt, Alela talks about her girls approaching the age when she might be able to show them some of the natural and quaint places around Nevada City that once inspired her early music.

“I love the Yuba River. I don’t think the little one has been yet, actually, but they’re old enough now where it feels like time to totally share that with them. Lately when I’ve been going to Nevada City, there’s a really sweet walk in downtown. They just put in one of those rope bridges and you can do the walk along the trail in Nevada City and over Deer Creek. That’s been really sweet because when you have kids you can’t be really ambitious with your level of hiking.” 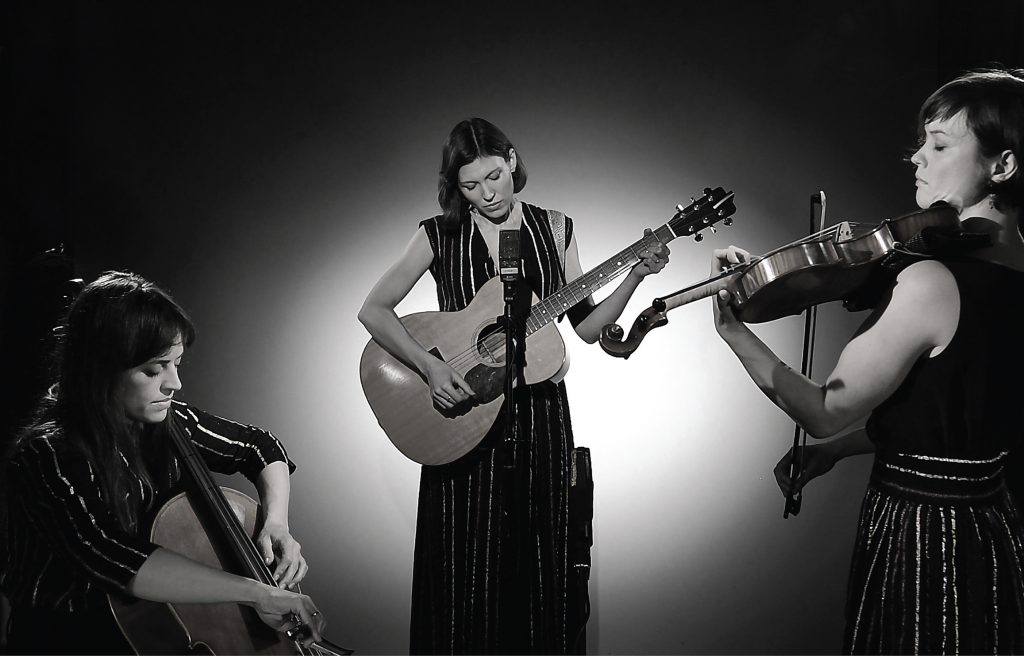 While her music channels the feeling of different people and spirits occupying overlapping places, it’s interesting to hear Alela speak about her own connection and history to her hometown, placing her own experiences on the old wooden footsteps and landscapes graced by others through time.

“A place I’m really excited to share with them was Malakoff Diggins [State Historic Park]. I love that place. When I was a child we would spend christmas out there. I don’t think they rent out the cabins anymore because state parks have so little funding these days, but when I was a kid they rented out those cabins and my family would have a cabin, my aunt and uncle and some other friends would have a cabin, and they don’t have any electricity, we would cook on the wood stove. My mom was very old fashioned and very nostalgic for those sorts of experiences, you know, dressing up in pioneer outfits.”

Though Portland, Oregon has been her home for 15 years now, the mountains and places of her hometown continue to seep into her music.

“I think over the years my music has continued to channel a lot of nostalgia for that place. On my record right now there’s a song I’ve written about going back to my childhood home. Last year right before covid hit I went down there and walked through my childhood home that was on the market at the time, it was being sold by the people who had bought it from my parents, and it was really intense. So I’m always kinda going back, whether it’s in dreams of that place or just like a deep longing and nostalgia for that loss, it  definitely comes through in my songs even recently.”

While retaining deeper connections to the Sierra Nevada, Alela sees its influence on her.

“I think that community is very nurturing to the arts, and very supportive of art and music, and I think that had a huge impact on me believing that music was a thing you could do with your life,” she says of Nevada City. “I think if I had grown up in a small town that wasn’t as supportive of the arts, I don’t know if I would be doing this.”

On her visits back to her old home to visit family, she remarks on the slowly changing facade of the old Gold Rush town. As small venues that fostered music and created a safe space for the creatively-inclined youth in the area become closed and replaced by a slightly nicer tourist environment of upscale dining and bars, Alela Diane recognizes that, like some of the weightier storylines of people who have graced her lyrics, the town also still seeds a music within its folds.

“That era that I grew up in in Nevada City has certainly ended but there’s still a lot of it that’s still alive and when I go back I can still totally sense that. There’s a new generation of young, recent high school graduates that are wearing prairie dresses and playing folk music, and I’m grateful that it seems to inspire that…”

Alela Diane’s recordings are available on all music streaming platforms…

Catch her on the web – aleladiane.com/