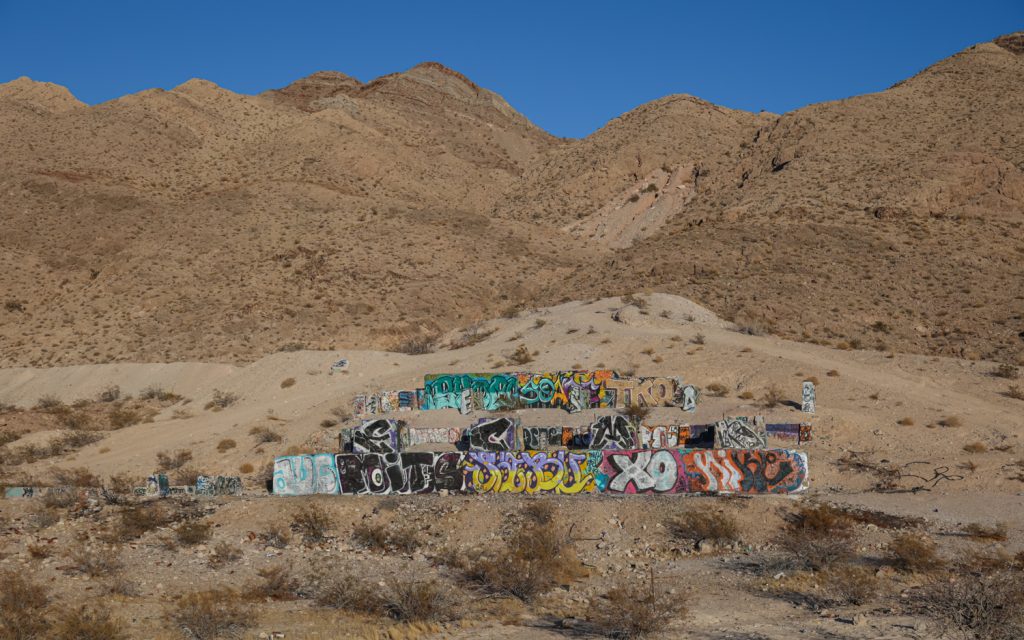 In August of 1903, an American fugitive named Paul Watelet attempted to enter Canada via Washington State. Watelet was trying to avoid an Ohio arrest warrant for fraud charges in connection to his company, the Colville Group Mining Company, for having misrepresented the group’s operations in order to obtain an investment from a John Carnahan for $4000 (approximately $120,000 in today’s money).

The warrant named “Count” Paul Watelet in the scheme of obtaining the money by means of false pretense.

Watelet was not actually a Count, but instead was a Belgian miner from Oakland, California. And sometime In 1905, he made his way to Las Vegas… 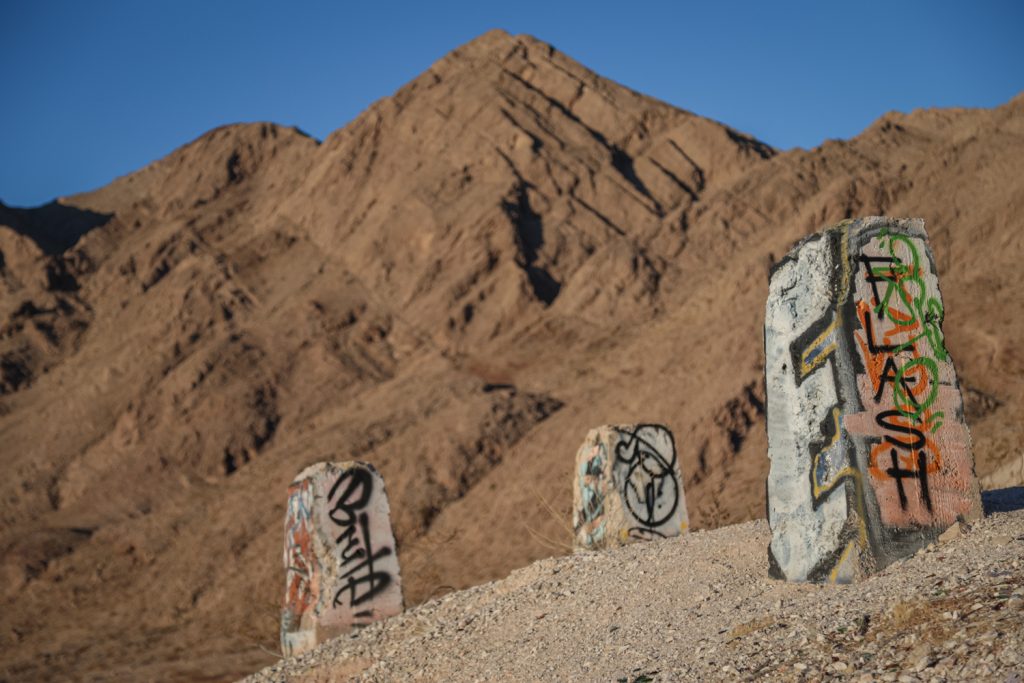 At the turn of the century, Las Vegas was a desert casino town built around the railroad. Visitors and locals alike still entered the gambling halls hoping to find their fortune in the dusty manufactured oasis.

From 1907, Paul Watelet mined a claim at the far eastern fringe of the Las Vegas Valley, at the base of what was then known as Gass Mountain (Today’s Frenchman Mountain). At the Frenchman Mine, he managed the South Nevada Gold Mining Company under the company’s president, George Hillegas. 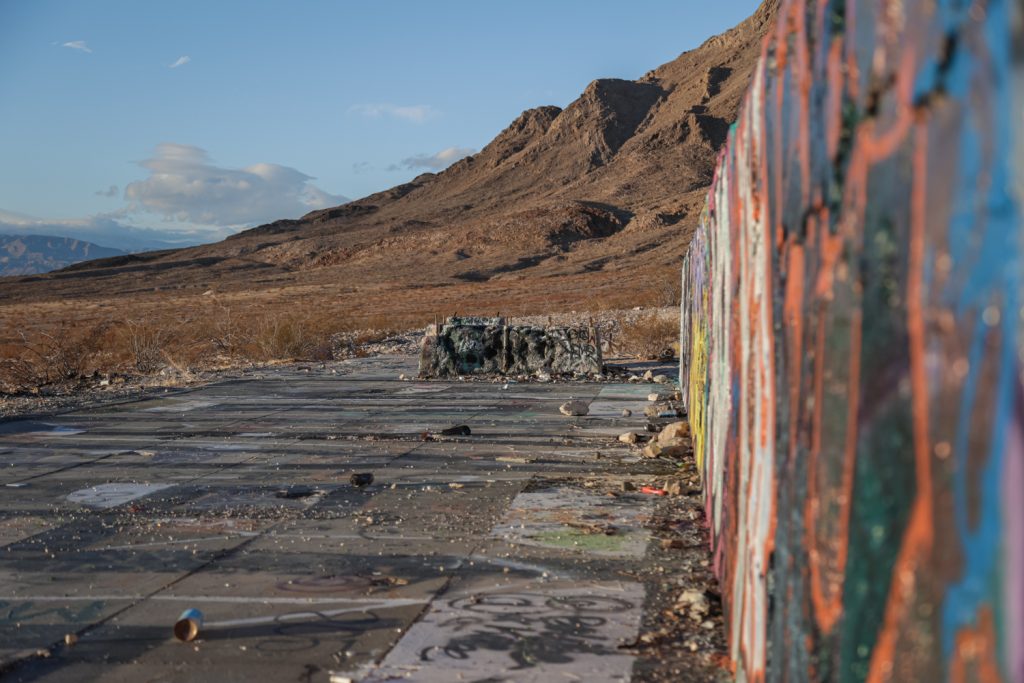 In February of 1912, businessmen at the Hotel Nevada – today’s Golden Gate – were approached and shown chunks of galena glittering with gold and told that the samples were taken from Watelet’s claims along the Las Vegas Wash. Around the same time, stories appeared in area newspapers reporting that the South Nevada Gold Mining Company’s claims had struck rich veins of gypsum and gold. Despite one paper running a story only a couple day’s later running a correction and saying that there was actually no value in the vein, the narrative of wealthy claims along the Las Vegas Wash stuck. In part with the investments of the businessmen gamblers, the South Nevada Gold Mining Company funded the expansion of the Frenchman Mine, building cottages to house the miners who were heading to the mine for work, as well as constructing a mill at the mine site.

Tunnels ran into sedimentary mountain. Hillegas and Watelet announched plans to construct new towns along the wash while expanding development at the Frenchman Mine. These plans were helped along by a report that Hillegas had produced overstating the actual amount of mining infrastructure and valuable assays in the company’s claims along the wash. 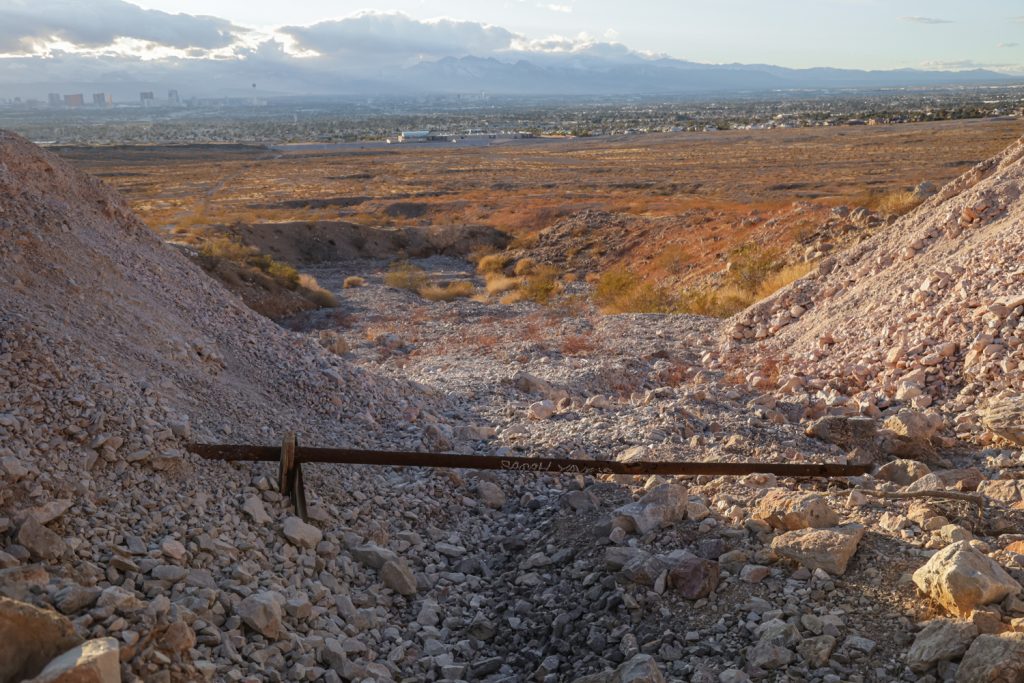 some mining detritus amidst the tailings piles

Soon after, the New York-based owners of the Winterwood Land Company bought a portion of the South Nevada Gold Mining Company based on the company receiving a valuation of a half million dollars – over $15 million in today’s money. Not long after this time, in 1914, both Paul Watelet and George Hillegas left Las Vegas. 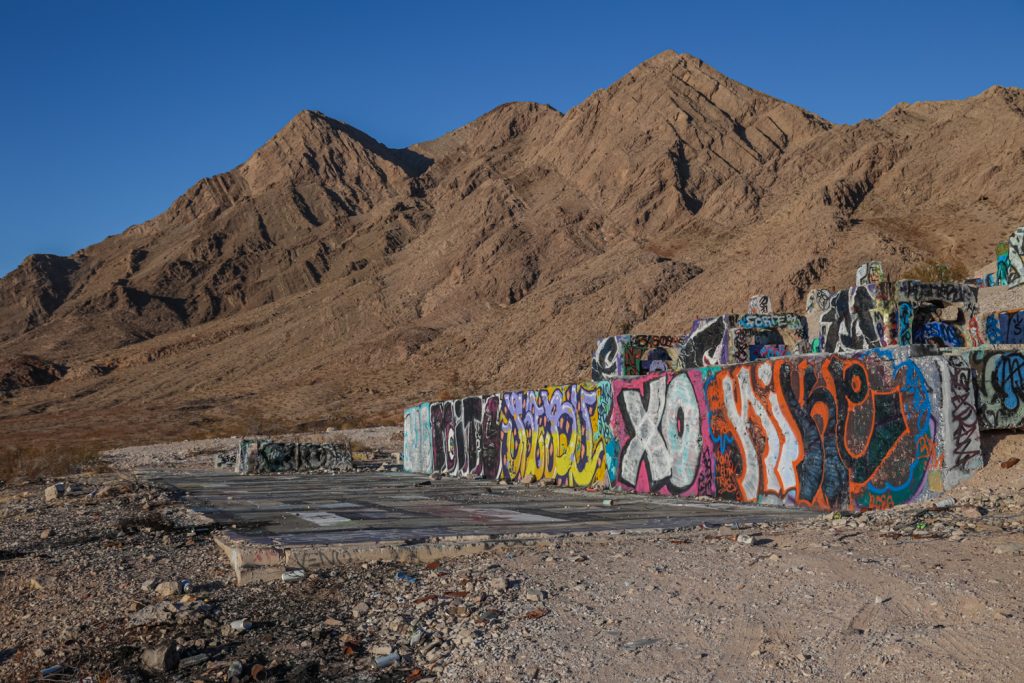 The mining camp housed workers who went into the mine tunnels and operated the mill. However with a new ownership structure in the place, the new towns promised to be built on claims along the Las Vegas Wash would never materialize – at least not until the metropolitan area’s expansion would eventually swallow it up in the later 1900’s. The land where the town of Hillegas was to be built would instead remain empty, eventually becoming the Winterwood Golf Course (today named Desert Rose at Sunrise Golf Course).

While the mill ruins still stand, along with some tailings piles, the most lasting remnant of the mine’s presence was seemingly replacing the name of the former Gass Mountain, the dominant peak along Vegas’ dramatic eastern edge, now known popularly as Frenchman Mountain.

In the 1960s experts searched but could find no evidence that any ore was ever shipped from the mine site, concluding that the entire thing was a hoax to lure speculators’ money.

In 1927, the remains of George Hillegas were exhumed from a pauper’s grave in New York and sent back to Berkeley, California, although it’s not known for certain if this was the same man.

The site of Frenchman Mine doesn’t hold much today, only some concrete remains of the mill standing beneath the mountain peak that now bears its name. The mine tunnel was sealed shut after a 15 year old boy disappeared while exploring there sometime in the 1940’s – his bicycle was found near the mine, however his body never was.

Today, from its perch at the valley’s edge, the sunset lights of Las Vegas cast more shine than it turns out ever passed through the Frenchman Mine. 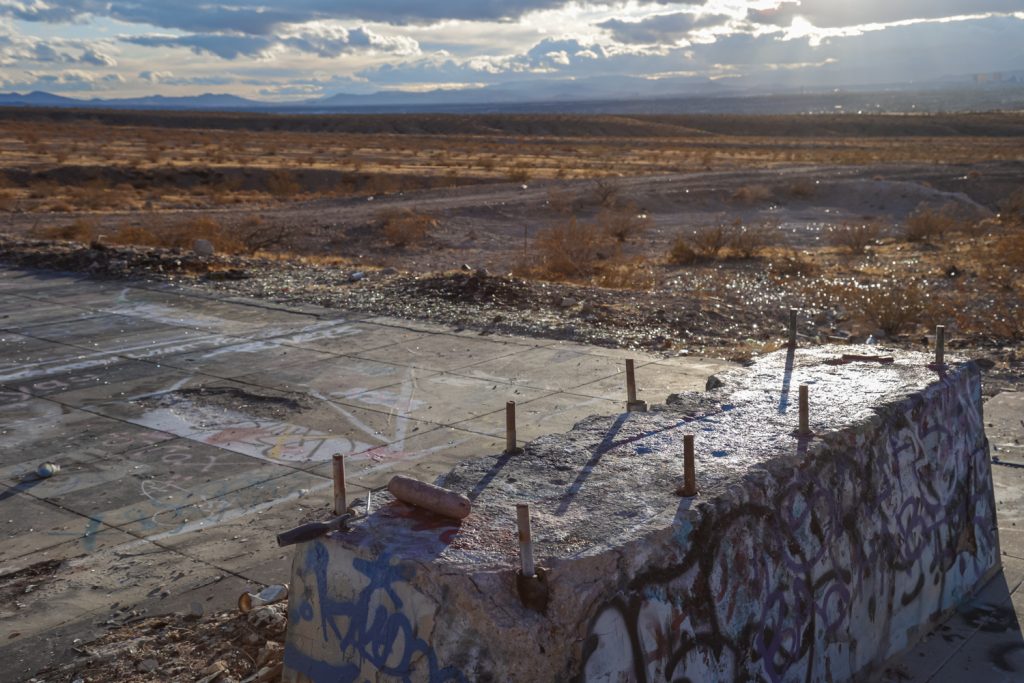 Experts would later admit there was no evidence that ore ever actually shipped from the mine. 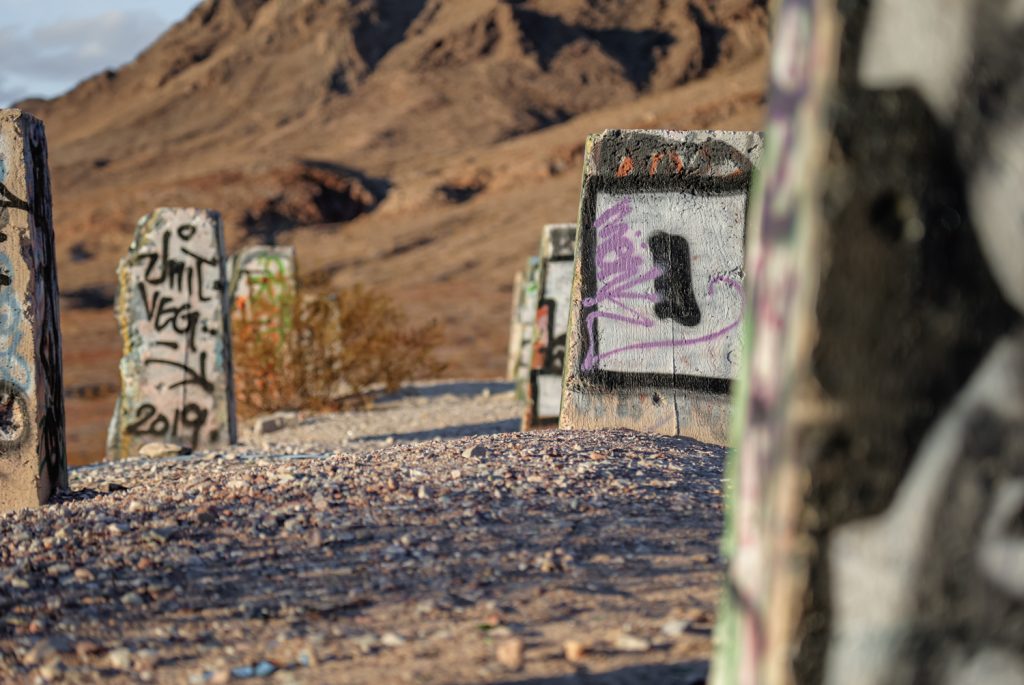 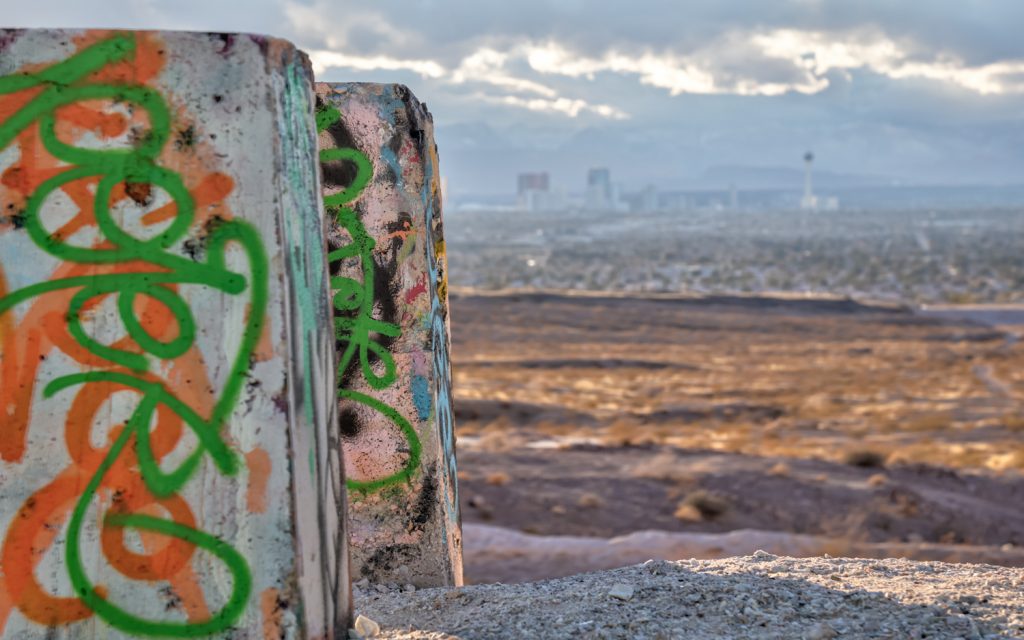 At the edge of the Las Vegas Valley. 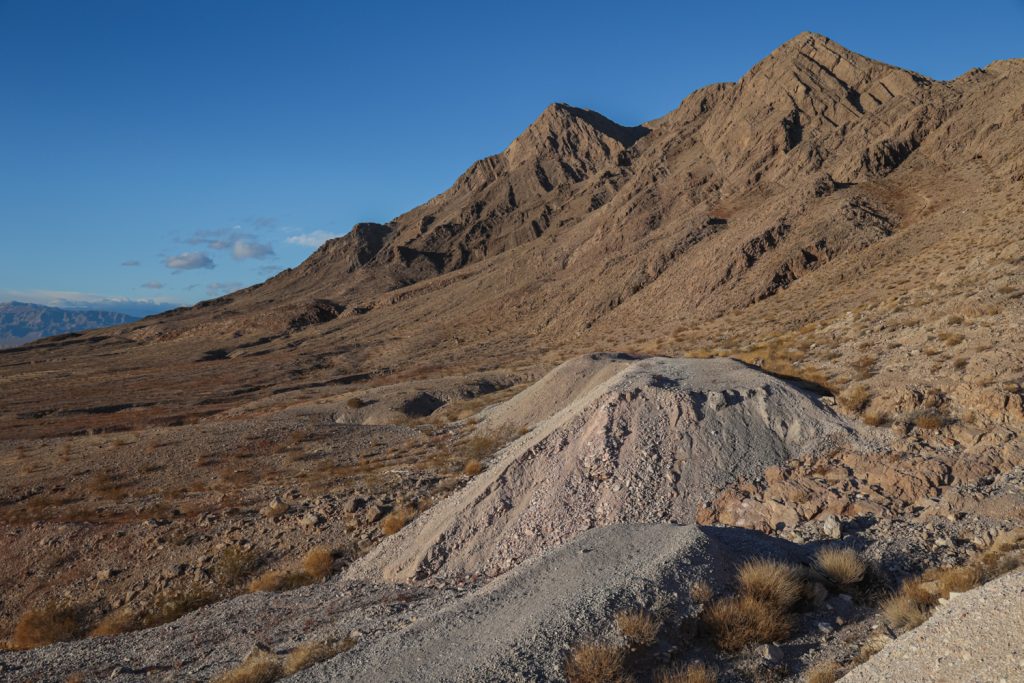 Frenchman Mine tailings piles under the peak now named after the site. 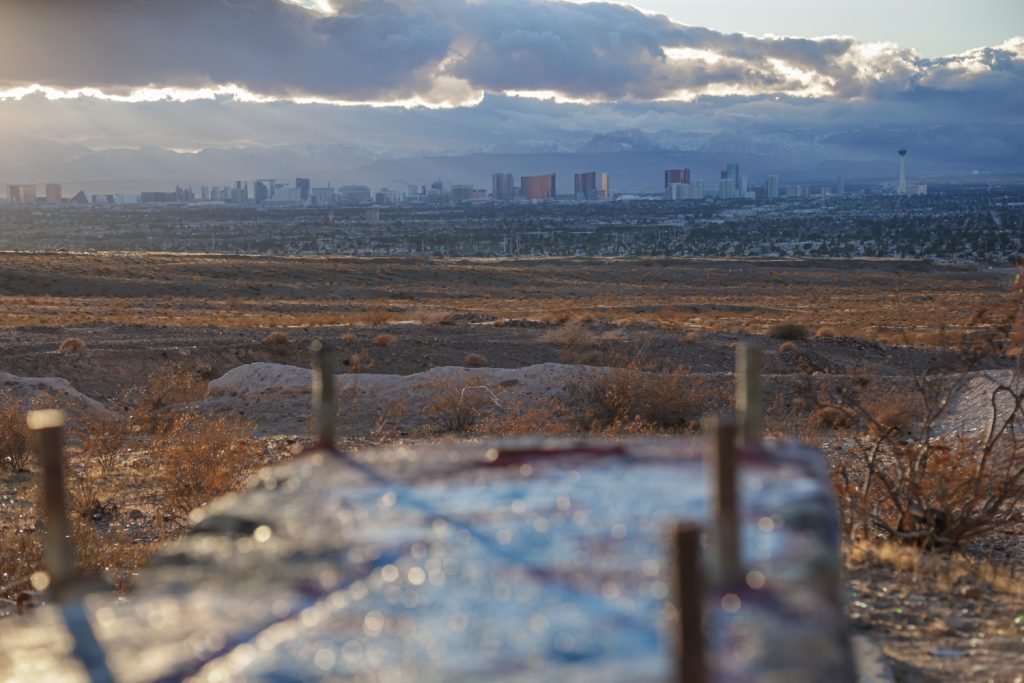