An Interview with Keith Morris!

For all of its reputation for being a paradise of palm trees lining beachfront real estate, beautiful people driving down sun-soaked iconic streets and glamorous displays of wealth parading through global pop culture screens and pages, Keith Morris has spent his life furiously writing about the manic depravity, the cankerous potholes underlying the façade, the stains that lie in the shadowy alleyways between pastel offices buildings and designer grocery stores.

“There’s construction going on right outside my window. Can you hear it? At least we’re not having this conversation on a Wednesday when the leaf blowers are out,” he says to me from his Los Angeles home.

Growing up in Hermosa Beach, a working class town that distance and culture leaves removed from the urban core area of Los Angeles and Hollywood, Keith fronted Black Flag, a band whose geographical differences from the other bands in Los Angeles contributed to a style that shared an outsider ethos with those LA-area punk bands. As such, Black Flag developed a style and reach largely different from the Los Angeles scene they have been lumped in with. With hindsight, it’s clear how Black Flag’s wrecking ball mentality plowed through barriers of what the combination of music and anger was capable of generating, the band’s dizzying drive of recording and touring carrying on a scorched earth path of playing shows in small towns who hadn’t before seen a level of aural ferocity like Black Flag. (In fact, it’s nearly four decades later, and few bands have come close in anger or in impact as Black Flag did.)

But running wildly into uncharted territory seemed to exacerbate the tense fissures between members. Morris has been open about the tireless rehearsal and tour schedules of the band leading to his exit from Black. Following this, he started Circle Jerks who seemed to take Morris’ cantankerous smirking lyrics and members who were also involved with Bad Religion and Redd Kross and released their own pantheon of essential punk records, lasting up until the mid-90’s.

With years of experience, Morris remains no less angry these days.

“We’re in this situation, part of the punk rock population just didn’t get it. And hey, that’s fine. There’s some people who can’t comprehend what we’re doing, who can’t grasp how ambitious of a move we’re making.”

Morris goes on to describe the projects of his current band, Off!, who are aiming to make a film and record a twenty-something song soundtrack for the it.Not exactly following the path of most hardcore bands, but then, that seems obvious given his background of playing music in bands who had a large hand in creating those paths to begin with…

If anyone’s ever interviewed Keith Morris, they know the conversation exists less as a Q&A and more in tossing out a prompt and getting the fuck out of the way of his steamroller stream of consciousness storytelling. For a man who will admit to his history of drugs, alcohol, and decadence that matched the barrier-smashing trajectory of his musical projects, his memory seems to have fared far better than most.

“You know what, when I was a kid living in Hermosa Beach, there was a liquor store directly across the street from my dad’s store down on Pier Avenue down on the pier, and I would go in there and I would get a pineapple crush and a couple of candy bars and pay the woman behind the counter. And as I was leaving, the elderly woman behind the counter would say, ‘don’t worry, everything’s going to be okay. Everything’s going to be alright’.”

Having been sober since 1988, Morris will admittedly state that anger still fuels much of his lyrics, though there is a depth that surpasses simple superficial rage.

“You can shut yourself off and keep yourself locked in your bedroom and learn or watch or listen to whatever you’re gonna take in on your computer. It’s like screw that, get off your computer and go out and live some life! Go out there and make some new friends, go out and listen to some new music. We’re getting all philosophical and all hippie dippie and all of that fun shit, you know what, it’s life! You just gather it and you adhere to some of it, some of it you toss off, some of it you hold onto, and it works for you.”

And many will note that his anger may arise from the same traits that fueled his lyrics in Black Flag.

“Pissing razorblades, I’ve been there and done that and I wouldn’t wish that upon anybody except some people that are over there in the White House. May their urine stream cause them ultimate pain. That’s kinda like Ronald Reagan. Didn’t Reagan die of brain cancer?… I mean it couldn’t have happened to a better person, a nicer person, an outstanding example of American leadership.”

But with time comes experience, and though the impetus of the anger is still there, the deaths of friends, the health issues and musical projects that didn’t find the staying power of those that adorn every record collector’s pile, the near death experiences have left lessons.

“I’ve been in a few that I shouldn’t have walked away from. When the highway patrolman had pulled up to me 60 mile earlier and said, ‘Slow down’.” Morris recalls a Texas patrolman pulling him over and simply warning him of ice on the road, while feeling only relief that he wasn’t given a speeding ticket. “I disregarded what he had to say because he’s the authority figure, he’s the cop, I don’t wanna deal with him. You know, roll your window up and get the fuck outta here.

“And I hit that black ice at about 75 miles an hour. When I hit that, the landscape was pulled out from underneath me. There were three other guys in the back of the van. The only injury was a bruised shoulder, a sore neck, and a swollen ankle. None of us were supposed to walk away from that. Every window in the van was broken. All of our equipment, all of our clothes, and all of our merchandise was tossed from the van.

“That was certainly a learning experience. Slow down…”

While Morris’ past in Black Flag, Circle Jerks and Off! offers a stronger résumé than most could ever imagine accopmlishing, musicians or indignation-prone cultural soothsayers alike, he’ll quickly tell you he has no plans of turning it down in the foreseeable future.

“These songs are part of our DNA. You have to experience it. And I’m gonna experience it for as long as I’m able to.”

After a lifetime of finding himself wading through the mire of unrealistic ethos and media fallout surrounding a punk scene his bands helped to popularize, dealing with addiction and health issues that those surrounding him often weren’t able to emerge from, and wrecks that could have – and maybe should have – proven fatal, Keith Morris is able to say, his words partially obscured by the din of construction enveloping him Southern California environment, “Have some fun; make some noise. Don’t worry about everything. Like the old lady in the liquor store said, ‘Don’t worry, it’s all gonna be alright’.”

Keith’s autobiography, My Damage: The Story of a Punk Rock Survivor, can be purchased here.

Keep up with Keith Morris here. 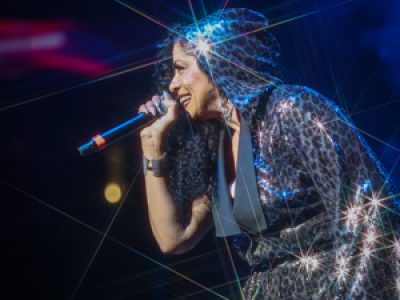