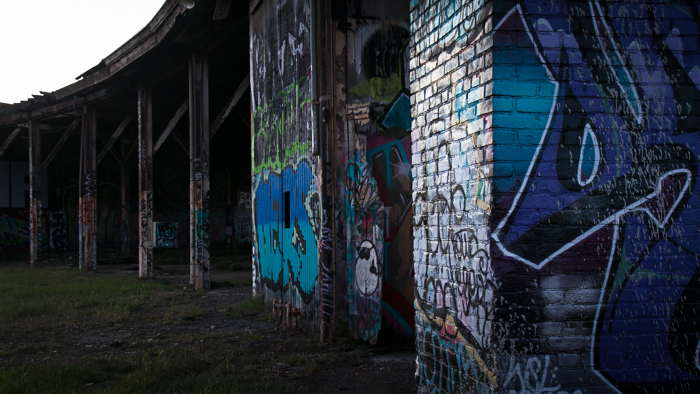 I’ve always felt that geographies and places have the ability to carry their own set of circumstantial forces and events that make up its past and current state of being, and, like with other people, that those elements can help shape the intersection between a place and a person, and if you approach these encounters without expectation, they can fall naturally and take on the direction that most benefits those involved.

This is amongst the reasons I’ve always felt drawn to the places that others have determined lack value or use. But if approached, it’s visiting these damaged and abandoned locales that can illuminate or shape our own ways of thinking about the way we use or value space and the past.

The Bayshore Roundhouse lies just south of San Francisco, and was a part of the sprawling complex used by the Southern Pacific railroad to switch, store, and service trains. A more detailed and thorough account of the Bayshore train yard can be found at: http://sanfranciscotrains.org/bayshore-roundhouse.html. In short, after a change in ownership at Southern Pacific, in 1901 new owner, E.H. Harriman, would construct tunnels and wooden trestles to create a more economic route into the yards in San Francisco as an alternative to the existing route which had to climb the mountains that existed south of the city. Construction was interrupted by the 1906 San Francisco earthquake, but this led to some of the quake’s wreckage being used to fill in a portion of the bay where the trestles were built. It was atop this fill Harriman had built a new switching yard and maintenance complex, naming this human-made landmass Bayshore.

The roundhouse was completed in 1910, and used for storage and maintenance of the steam locomotives used at the time. Constructed with 40 spur-like tracks surrounding the steel turntable, only 17 of these tracks were ultimately covered.

By the late 1950’s, more efficient diesel engines, which were less apt to require maintenance and also sizably larger than steam engines, had become the new railroad standard, and the amount of work performed inside the Bayshore Roundhouse complex lessened. In 1982, the roundhouse was closed for good. Though the multiple tracks across the rest of the train yard remained active, they were eventually closed in 1988.

The Bayshore yards were fenced off, however over the time of the facility’s use, development of the San Francisco area had become the sprawl that marks the current form of the city. Today, despite being enveloped by condos, bars, factories, and infrastructure on every side, the Bayshore yards remain a mostly-empty respite from the dense concrete and development that surrounds it.

There is always a way in, whether that way requires figuring out how to cross a barbed wire fence, bypass surveillance and alarms, or being willing To wait. This isn’t in reference to the roundhouse so much as it is a general rule.

In 2001, the roof over half of the complex caught fire and collapsed. And though the structure remains in the hands of a private developer, others have worked to gain historical status recognition for the roundhouse complex. It currently sits amongst only a couple other structures remaining from the height of Bayshore’s usage as Southern Pacific’s San Francisco facilities, and current plans are calling for eventual development of the land around the roundhouse while preserving the roundhouse for use as a railroad museum.

For right now, though, the structure sits quiet. A visible reminder of the past resting amidst a train yard’s feral de-evolution into brush and shrubs that grow in wide parallel lines marking the former track beds. In an area where the economic value of tearing down the old to construct loft living spaces and craft ‘fill-in-the-blank’ small business’ have made these quiet spaces relatively rare, what struck me as even more uncommon was not the building itself but the open space around it. The former yard has become an urban gray area large enough that even if the city’s hum couldn’t be escaped, it could be made to feel distant; the cranes at the former 49ers stadium, the CalTrain station’s lights and the 101 freeway climbing into South San Francisco all far enough away, beyond brush and trees that have grown in the Bayshore yards’ fringes, beyond the light towers silhouetted with hanging cables no longer connected to any power grid, beyond the owl nests and cool air that now hang upon the roundhouse building, beyond the scattered piles of rolled up chain link fencing lying on the ground that have failed in the past to keep people outside of the building structures.

(to view images larger or purchase digital or prints, click on the link at the bottom.) 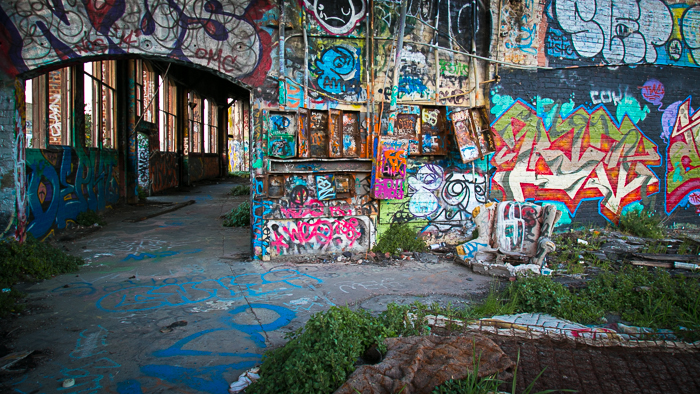 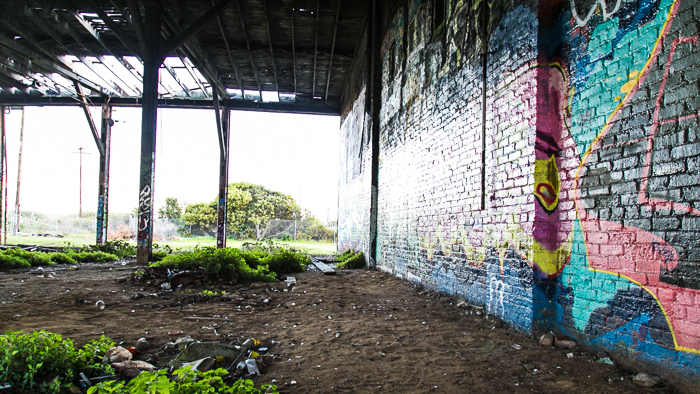 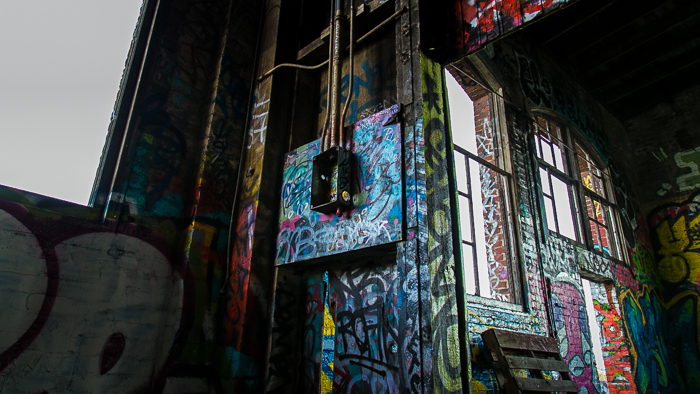 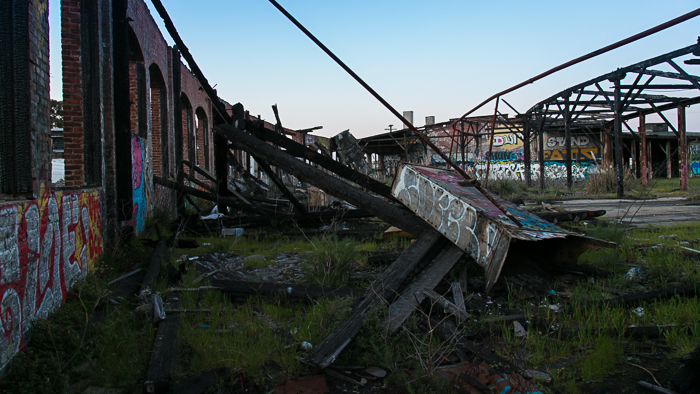 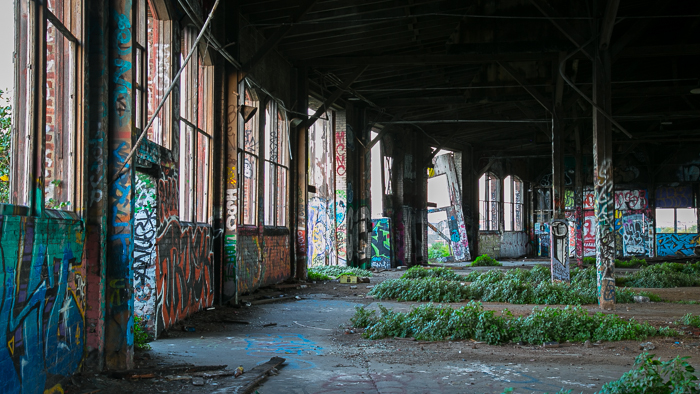 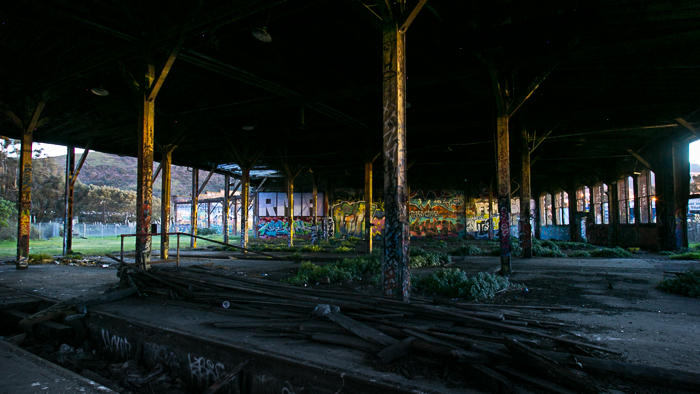 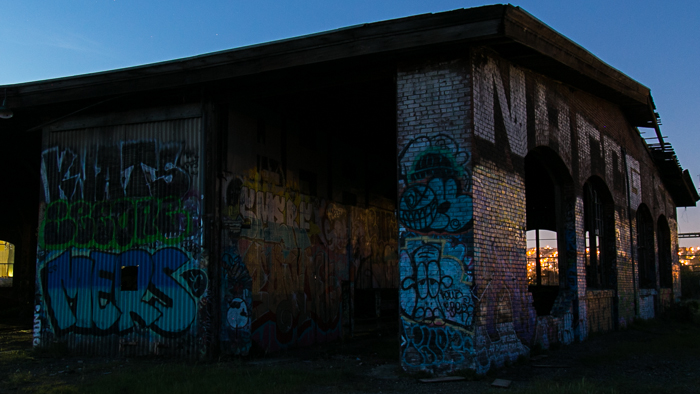 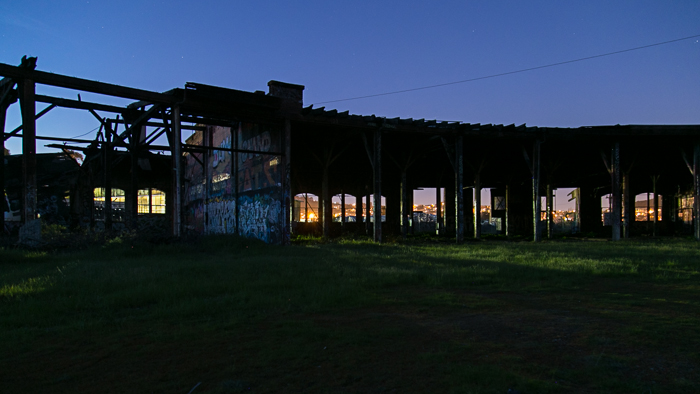