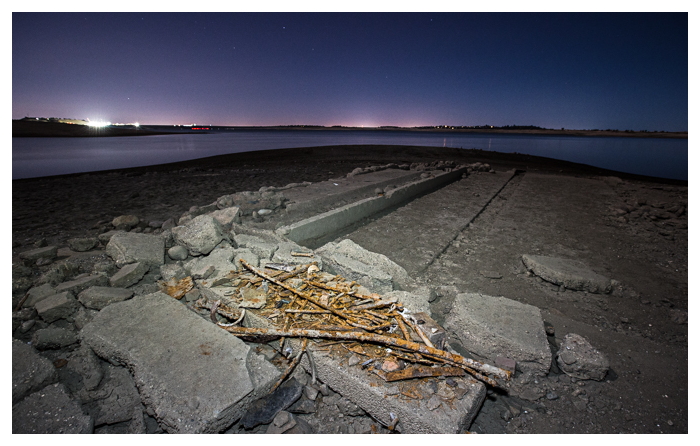 California’s drought conditions have caused the water level of Folsom Lake to fall, revealing the ruins of a mining town buried beneath its waters 60 years ago.

In 1955, following the completion of the Folsom Dam project – a dam built at the confluence of the North and South forks of the American River about 25 miles northeast of Sacramento, California – the rising waters of Folsom Lake consumed and made hidden the remnants of the town of Mormon Island. The town would lay buried beneath the waters for nearly 60 years.

Founded by a party of deer hunters from Sutter’s Fort (which would later become the town of Sacramento) who found gold along the South fork of the American River in 1848, Mormon Island would soon grow to a population of 2500 people, many Mormon farmers and miners. The town was built upon a sandbar beside the river, and took the ‘island’ name due to the Natomas Canal, built to transport water to the mining establishments, creating the town’s southern border.

1856, under company president and future Civil War General William Tecumseh Sherman, saw the completion of the Sacramento Valley Railroad connecting Sacramento and the line’s terminus in Granite City (later renamed Folsom). The population of Mormon Island was already declining as Granite City began to grow as a population center. Later that year, Mormon Island suffered a fire that destroyed much of the core area of the town. It was never rebuilt.

At its height, the town boasted multiple hotels, commercial stores and saloons. But by the 1940’s, only a few families remained scattered around the outskirts of the former town. In 1944, Congress authorized the construction of the Folsom Dam, under which plan the area of the town of Mormon Island would be inundated beneath the waters known as Folsom Lake. In 1955, what remained of the razed ghost town was buried beneath the lake.

Pictured here on the night of the full moon during the Summer of 2015, Mormon Island is accessible by tracing the lake bank on the south side of Browns Ravine to the west. What remains are several foundations, along with capped wells and many rusted tools and artifacts, as well as glass and rubber items that have lied buried near the old townsite until the waters receded. Light glow from the Folsom area, along with lights of nearby buildings and the dam itself illuminated the background of the photographs. 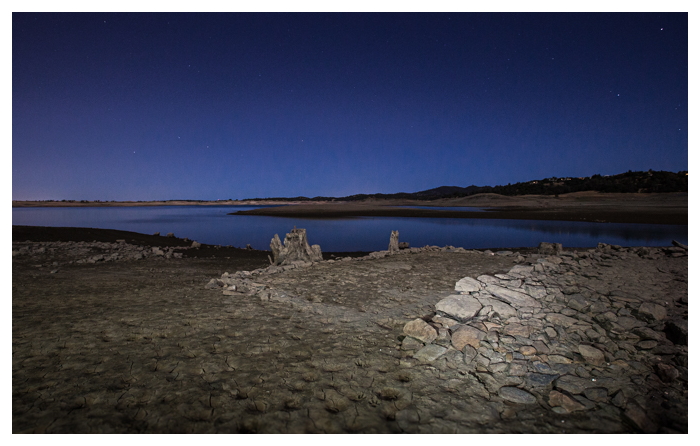 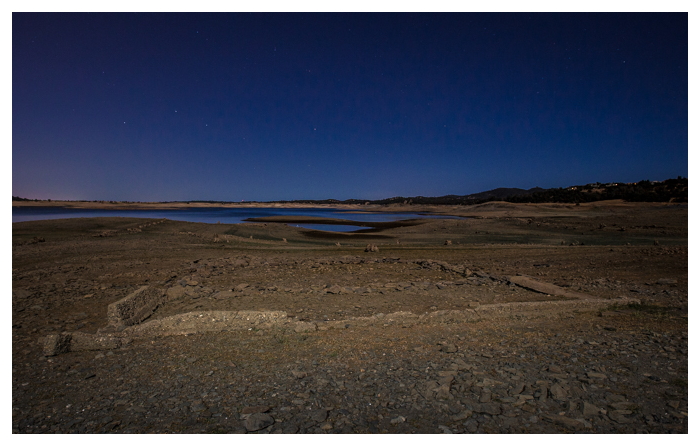 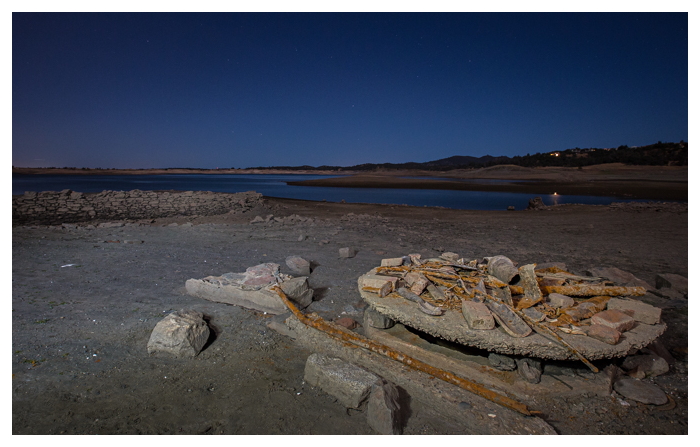 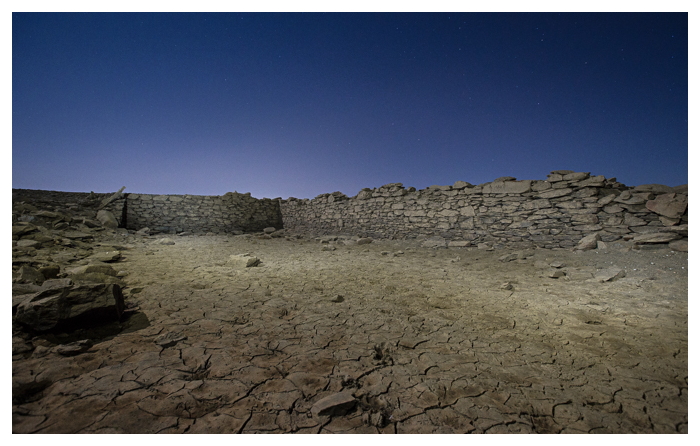 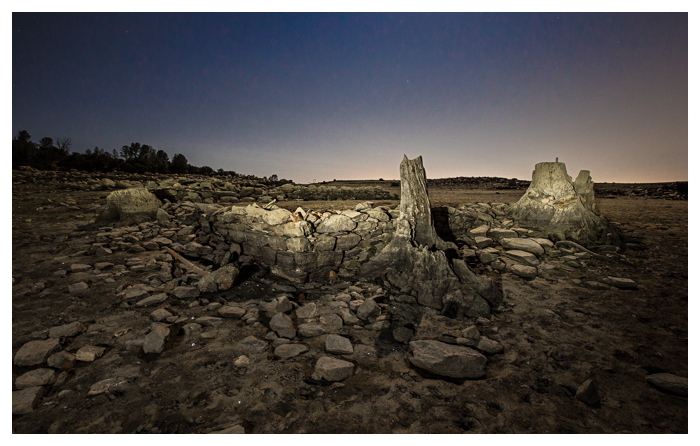 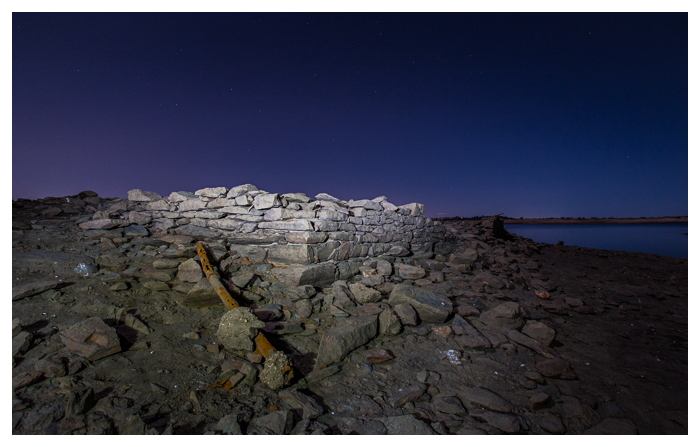 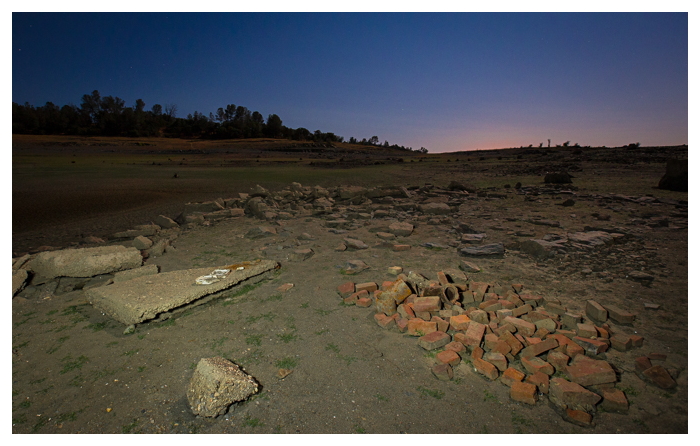 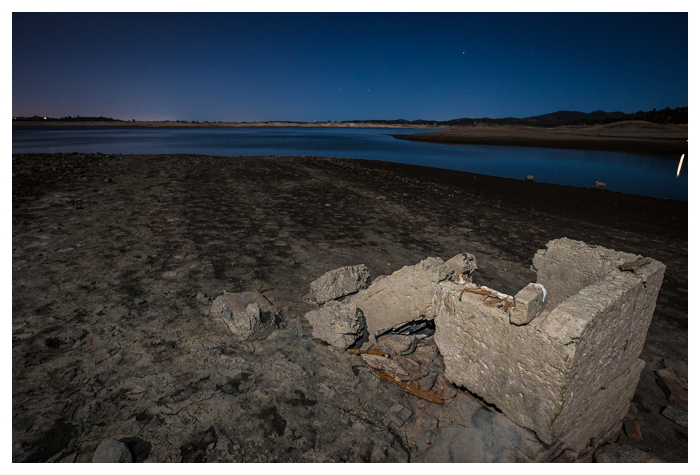