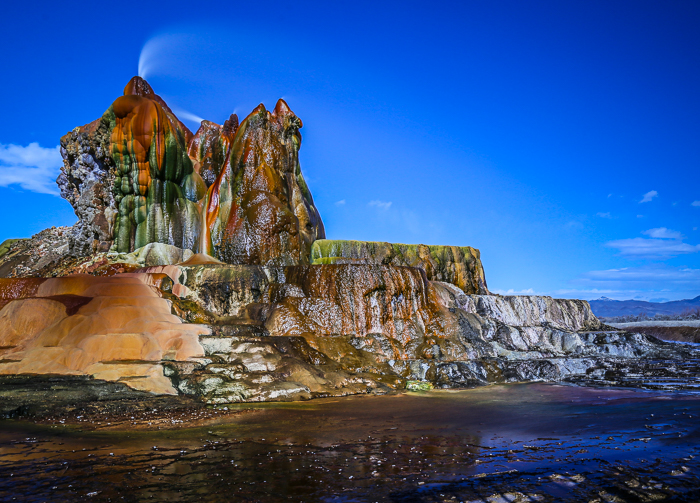 An accidental series of events while drilling in search of sources of geothermal energy in the rural Northern Nevada desert resulted in the growth of a picturesque formation of terraced pools and colored spouts that has come to be known as Fly Geyser.

It’s one of the most colorful and odd land formations in Nevada, though its creation was purely an accident. Fly Geyser, a misnomer as it is actually an artesian spring, was created when a 1964 geothermal exploratory drilling operation struck an underground hot water stream, sending the mineral-rich water gushing into the air. Efforts to cap the spring weren’t quite effective, and over time, the mineralized water has created multiple towering spouts, colored in a rainbow of mineral hues.

The area of Hualapi Flat, located just above the Black Rock Desert, has numerous hot pools as a result of underground tectonic rifting and faulting heating water, some of which surfaces at temperatures of over 215 degrees Fahrenheit – temperatures beneath the surface have been measured at up to 286 degrees.

A similar occurrence happened in 1912, when efforts to reach water in hopes of establishing a viable agricultural area tapped into the underground water source. It was determined that the water was too hot for agricultural use, and efforts to use groundwater as an irrigation source were abandoned. These efforts resulted in another geyser being created, this one over time forming a calcium carbonate cone reaching a height of over 10 feet. Flow to this cone eventually ceased when Fly Geyser was struck, however the original geyser along with a couple other mounds, remains visible. (As a side note, Nevada is one of only three US states with naturally occurring geysers. However both instances of  natural geysers in Nevada have ceased to flow as a result of development to and around them.)

Fly Geyser rises above multiple terraces forming about 30 to 40 pools. The travertine mound is shaped and formed by the accumulation of dissolved minerals occurring in the water. Iron creates the red hues, sulphur the yellow and thermophilic algae forms the green.

Fly Geyser sits on private land and remains off limits to visitors, however in 2016, Burning Man purchased the Fly Ranch property and has stated their intent to open the area to public access in the future. 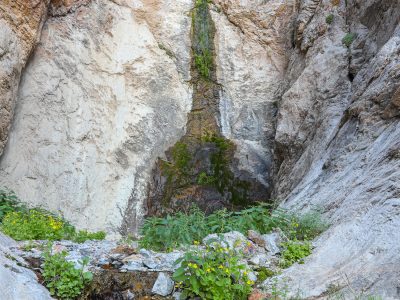