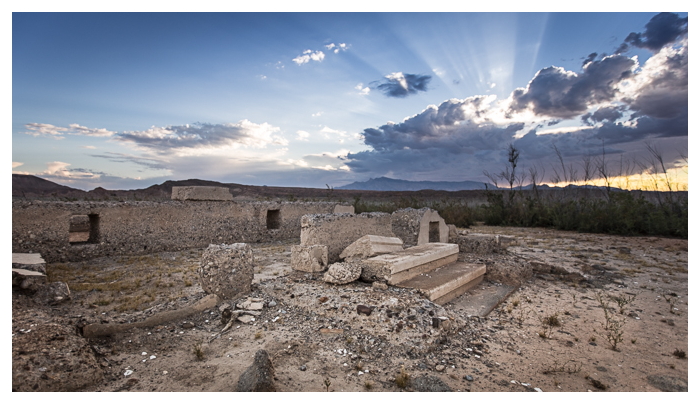 a ghost town re-emerging from beneath the waters of Lake Mead.

“There are two easy ways to die in the desert: Thirst and drowning.” – Craig Childs

What’s left of town of St. Thomas once sat hidden at the bottom of Lake Mead, though many foundations of this former town have recently been uncovered due to the declining waters of the lake.

In 1865 – five years into the American Civil War and with minimal cotton production from the southern US – Brigham Young sent a group of families  south from the heart of Utah Territory to the Moapa Valley, a valley in the arid Mojave Desert near the confluence of the Muddy (a river whose spring-fed waters flowed year-round) and Colorado Rivers to establish a stable source of cotton production for the Mormon communities further north. Believing they were still in Utah (despite Arizona having claimed St. Thomas as the county seat of Pah-Ute County in 1867), an 1870 land survey determined that St. Thomas sat within the state of Nevada. When faced with owing back-taxes (Nevada required all taxes to be paid in gold, rather than allowing payments in agricultural goods as was permitted in Utah), all but one Mormon family voted to leave and return to the jurisdiction of Utah without paying taxes.

Following the exodus, St. Thomas went through a period of squatters and outlaws settling within the town, opening saloons and having horse races, before the town ultimately returned to being a Mormon farming and business community.

This second wave of St. Thomas saw fields and orchards growing peaches, figs, barley, almonds and wheat. Adhering to the authority of the Mormon church over government, St. Thomas contained no police, jail or town government buildings, though the schoolhouse would double as a Mormon church and community center.

St. Thomas’ fortune would shift again in the late 1920’s when surveyors began to visit the area. In 1928, congress approved a plan to construct the Boulder Dam across a narrow section of the Colorado River less than 40 miles away, a project that would create a reservoir on the Colorado known as Lake Mead whose waters would inundate the town of St. Thomas.

In the late 1920’s when the bridge over the Muddy River was destroyed by fire, the new bridge would be built to the north of the town. The federal government began purchasing the lots in the town, the average payment coming to about $40 per acre. By 1932, the entire town was government-owned. The schoolhouse would close for good the following year. Many of the buildings were physically moved to other towns before the flood, anda the orchards and large trees were cut down so as to not become snags for boats beneath the rising waters.

In June of 1938, waking up to rising water lapping at the foot of his bed, St. Thomas’ final remaining resident, garage-owner Hugh Lord, loaded the last of his possessions into his boat, and set fire to his house before rowing away from the town.

For the next several decades, St. Thomas remained at the bottom of Lake Mead. At one point, the foundations of the town sat 60 feet below the lake’s surface.

In 2002, 64 years after initially being flooded and submerged, St. Thomas emerged from the declining water level of Lake Mead. Today, as increased consumption of water throughout the growing metropoles of the Mojave Desert and agricultural communities adjacent to the Colorado River, Lake Mead’s levels have dropped at a rate potentially perilous to the Boulder (now Hoover) Dam, and the scattered foundations of St. Thomas sit again in the arid Moapa Valley, reachable by dirt roads and a hike amongst the sharp tamarisk that has invaded the former lake bottom. 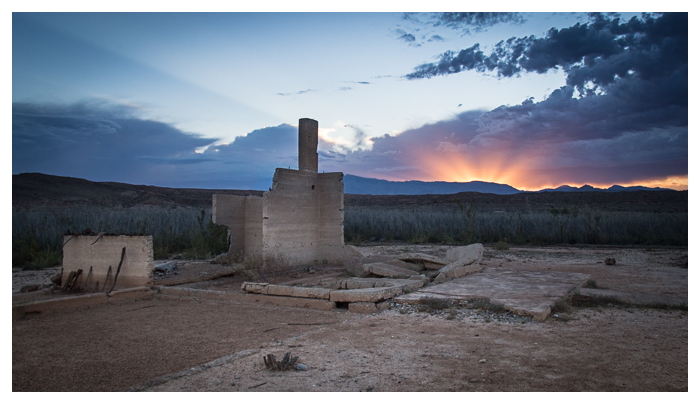 Remains of the chimney of the Ice Cream Parlour 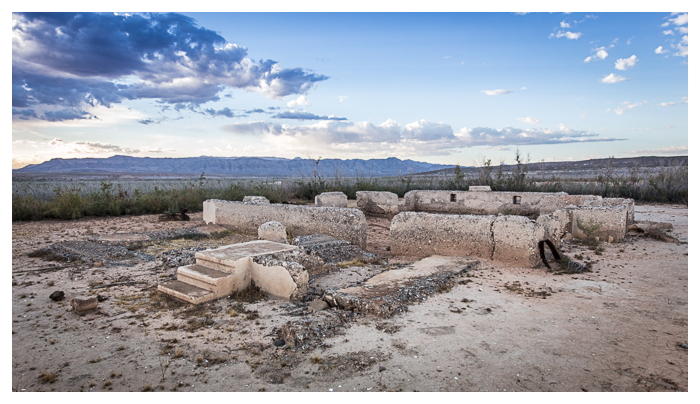 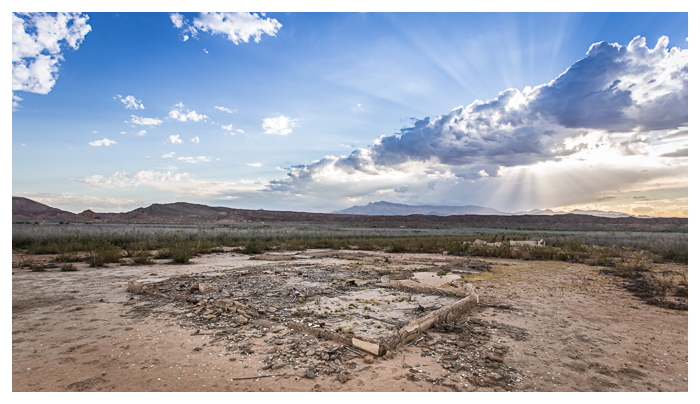 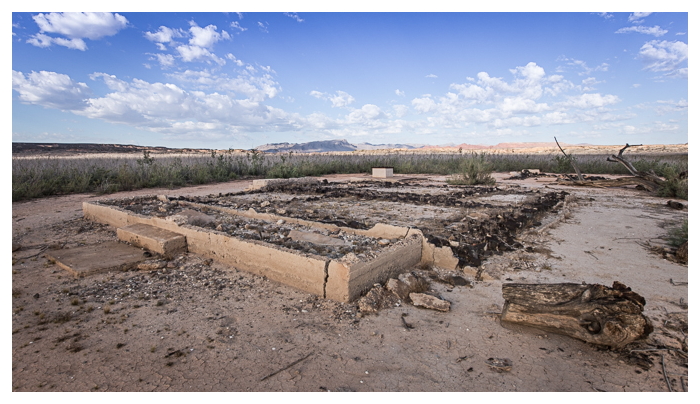 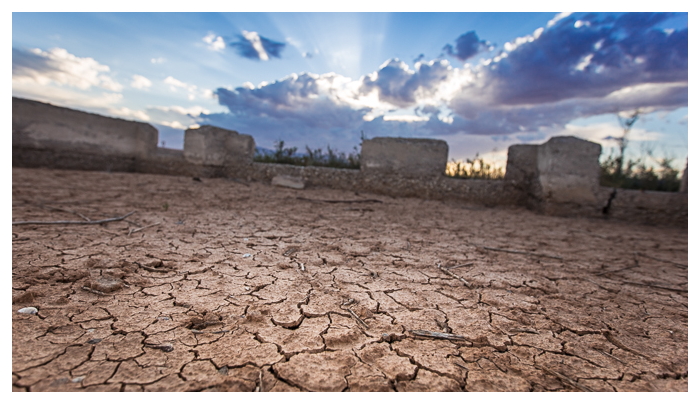 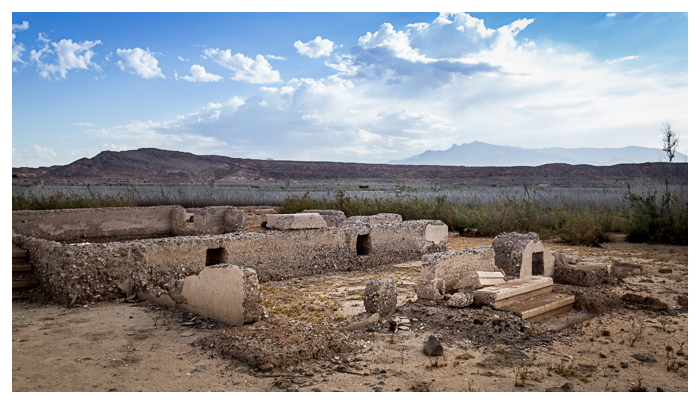 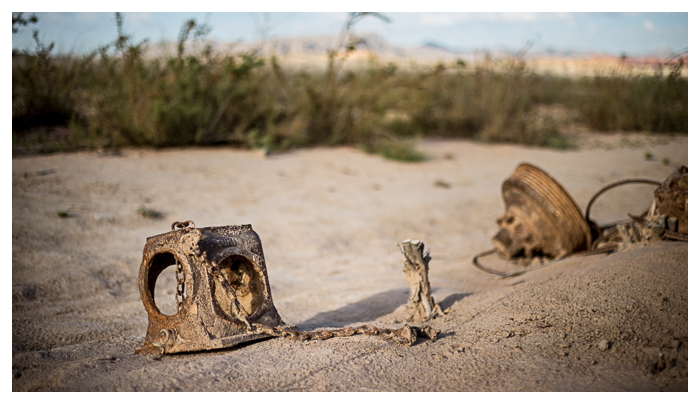 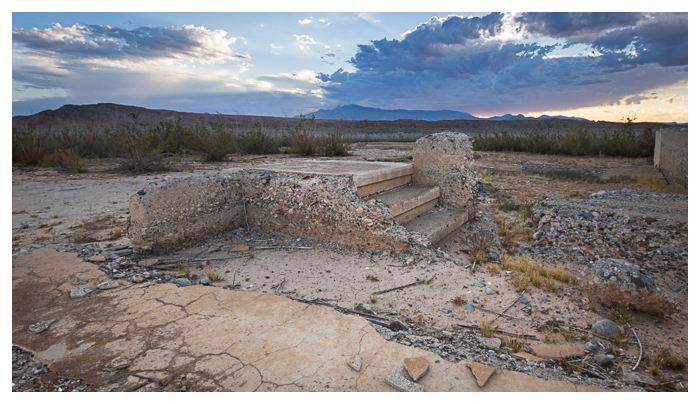 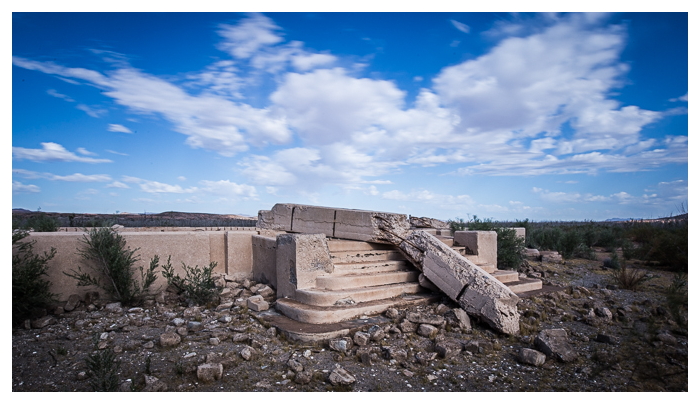 The foundation of the schoolhouse, which doubled as the town’s church and community center. 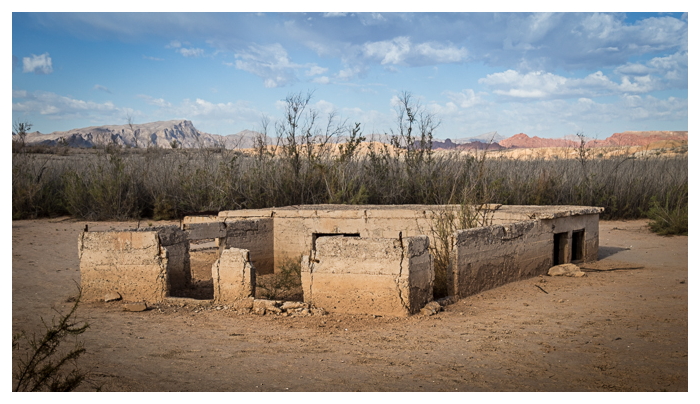 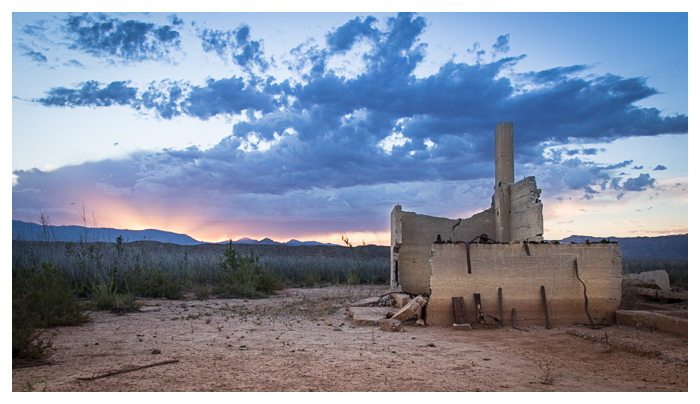